Saturday morning, I stood in a 203 year old church in Nassau, the capitol city of The Islands of the Bahamas. Along the walls of the historic building are stone memorials commemorating past ministers, members, and city leaders who poured their lives into this church. It’s a startling remembrance that the church of Christ is strong, far-reaching, and rooted.

In January, CityChurch Wilton Manors officially launched public, weekly worship. The journey began as far back as 2011 when we began gathering a launch team. In the last year and half, we have seen many wonderful faces come to be a part of what God is building here in Wilton Manors, with a number of them signing on to commit themselves to helping this new church begin.

Standing in a church born one year after the birth of Abraham Lincoln, I shared with my fellow colleagues about the work God is doing in Wilton Manors. As I spoke, I noticed the stone memorials and their permanence even more, and yet I thought about the “living stones” God has brought together in Wilton Manors. Our church is only a little over a year old. As stones we are green and new. But, our center, our cornerstone, is the same rock that holds together the majestic walls of St. Andrews Kirk and its people. Jesus’ Church, is built upon himself. It’s roots produce fruit of faith, hope, and love, reaching into new parts of God’s earth advancing the kingdom of God.

Two churches. Separated by ocean and time, share the benefits of being built by the master architect and builder. Jesus himself.

The 5 Steps of Linsanity 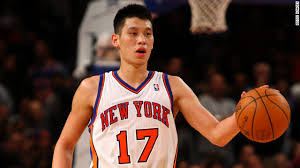 From the beginning my hope for this blog was to get behind issues, topics, thoughts, and view them from another angle. A different, hopefully better angle.

Over the last two weeks something has happened to America. Linsanity. Even if you are not a sports fan, you have probably seen or read a story about a new person on the New York Stage. Jeremy Lin, point guard for the New York Knicks.

To better understand the power of this story, here, in my opinion, are the five steps of Linsanity:

1)   Basketball – We’re talking about a 6’3”, undrafted, rookie basketball player from Harvard University. Not exactly the basketball factory of Tobacco Road in North Carolina. Lin, passed on by every NBA team in the draft, was already cut this year by his hometown Golden State Warriors, and the Houston Rockets. The desperate New York Knicks took a flyer on him. Due to injury, and the ineptitude of their current players, Lin was given an opportunity.

Here are the facts: The man can play basketball. He can run an offense, distribute the basketball, pull up and shoot long jump shots, and amazingly, consistently drive to the basket and score. These are things that Harvard doesn’t prepare you to do. Many are wondering if Linsanity will last. Can he keep up this level of play? The answer is yes. Because he’s that good of a player.  The first step of Linsanity is to realize what you’re dealing with. Talent.

2)   New York City – The media, and the public are fooling themselves if they don’t believe the second step of Linsanity is the combustive ingredient of New York City. If Lin would have taken off with his home town team in Golden State, it would be a very nice basketball story, maybe the basketball story of the year, but it would NOT be Linsanity.

Just like everything else New York City touches, it turns to gold, or ashes. And this is gold baby. Gold.  Like no other place in the history of world civilization, New York gets its hands on a star and makes it shine brighter than the Sun. The second step of Linsanity is believing that place, location, and timing are equal players in the creation of a phenomenon.

3)   Harvard – While you are fully coming to terms with the importance of step 2, go ahead and mix in the most influential educational institution in our nation’s history. New York + Harvard = step 3 of Linsanity.

The Harvard’s, Yale’s, and Oxford’s of the world do not waste time producing athletes at the highest level. They produce wielders of social and political power. We’re now dealing with an individual who is uniquely gifted. Certain institutions in our nation wield different levels of power. It’s called social capital. The Wall Street Journal and New York Times hold more social capitol in our society, than the Ft. Lauderdale Sun-Sentinel and  Kansas City Star. Harvard holds more social capitol in our society than every school known for their basketball prowess. Skilled, intelligent, smart, and standing atop the mountain of the social heap in America. Step 3 of Linsanity, is a grab for power.

4)   Christian – This is perhaps the most interesting step of Linsanity. There has been much talk surrounding the faith of famous athletes recently, most notably the popularity of Tim Tebow in the Evangelical Christian community. A phenomenon reaches new heights when entire people groups can embrace it. Just like Tebow, Jeremy Lin is someone Christians cheer for and identify with. If you doubt the validity of step 4 of Linsanity, I invite you to read Michael Luo’s recent piece in the New York Times (here) Luo writes,

He grew up, like me, in the United States, speaking English; his Chinese, like mine, could use improvement. He went to my alma mater. And, yes, he is a Christian, too, but with a brand of faith, shaped by his background, that I can relate to much better than many I have seen in the public arena.

It’s that last bit that sticks out. I’ll let you the reader chew on that and decipher what you will, but that last line, is a line tailor made for this blog.

5)   Race – There’s no way around it. The final step. Race, is step five of Linsanity. Many in the media struggle to find the right tact, tone, and words to fully unravel this facet of the Lin story. Talking about race in America can be the stuff of legends, or the revealer of fools. Race is indeed a part of this. Once again I refer to Michael Luo,

The feelings the Lin phenomenon instill in me are orders of magnitude greater because he is an Asian-American, like me, whose parents were immigrants to this country, like mine. He grew up, like me, in the United States, speaking English; his Chinese, like mine, could use improvement.

He looks different than anyone on the court. And that helps our interest.

Couple that interest with eye-popping, out of nowhere untapped talent, the stage of the Big Apple, the social capital of the leading institution in America, and a vibrant faith… Boom. Linsanity.